Most people go through life expecting good things to happen to everyone else, except them.

Take a moment and consider the absurdity of that statement. Some people believe they are “the only one” that was selected for negative things to happen to. If that were true, everyone born into poverty, a bad situation, a third world country, or oppression would have no chance of a better life. Likewise, those born into any kind of privileged circumstances would live a life of ease and comfort and never fail. We all know neither of these statements to be true.

In reality, the most successful people have all gone through some of life’s greatest adversities. But what if these great people decided after their misfortunes and hardships, that life had dealt them a lemon and they were destined to a life of poverty or mediocrity?

Steven Spielberg: Was rejected from film school at USC twice.

At one time, I too thought my life was pigeonholed. What I found out was we can have, be, or do whatever we want. It wasn’t until I truly BELIEVED it for me, DECIDED to take make a change, then finally took ACTION on a consistent basis, that the things I really wanted, began to come my way. It was up to me! And, it is up to YOU!

Though everyone has a different starting point, we all have the same possibility. The choice is all yours. You can rationalize and accept your situation, or you can fight for what you want. You can focus on what you don’t have, or work toward what can have. You can continue with the same destructive mindset, or you can open up to the possibilities of a better life.

The choice and responsibility are ultimately all yours.

Have a greater day! 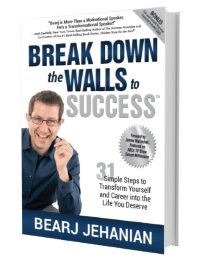 “Take your life to the next level and read Break Down the Walls to Success!”